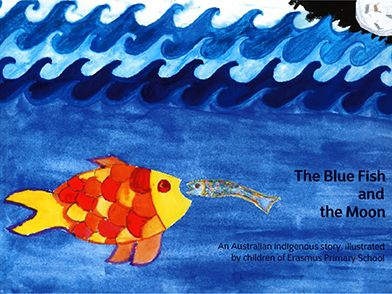 The Blue Fish and the Moon

Last year, with the Philosophy and Art departments of Erasmus, children from Years 3 – 6 worked together to create an Australian indigenous picture storybook called The Sun Goddess Brings Life to the World. You may have your own copy of this book or have seen the display copy in the Erasmus office. There are still a number of copies available for purchase at $25 each.

We have now produced the second of these Australian indigenous picture storybooks – The Blue Fish and the Moon. Last week, the book was shared with the whole school in our Friday Assembly. Select students from Yrs 3 – 6 (2021) created the artwork. This time, the text is addressed to older young people as well as to adults. It is profound and very thought-provoking, the theme being ‘Do we become what we believe?’.

An excerpt from the opening is below:

Loolo was known as the unhappy man. As he lay next to the fire with his wife at night, he would tell her all the upsetting things he believed. He believed that the night was unfriendly. He believed that when they died, their spirits would walk through the unending night until they shrivelled up and ceased to exist. His wife would cry and he would try to comfort her.

Nullandi was known as the happy man. Laughter came from around his campfire. He liked the night and said it gave rest to the eyes after the fierce light of the day. His wife called him foolish and said that at night, one could not see.

The book has again been beautifully produced in glossy hardback, with 150gm semi-gloss internal paper. A sample copy is in the office should you wish to see it. It really is a stunning production.

The cost is again $25 per copy (covering printing costs only).